This is a rare interview with the legendary Alexey Kuznetsov (a.k.a. ANK), who happen to work for Parallels. Alan Cox once said he had thought for a long time that "Kuznetsov" is a collective name for a secret group of Russian programmers -- because no single man can write so much code at once.

An interview is taken by lifehacker.ru and is part of "work places" series. I tried to do my best to translate it to English, but it's far from perfect. I guess this is still a very interesting reading. 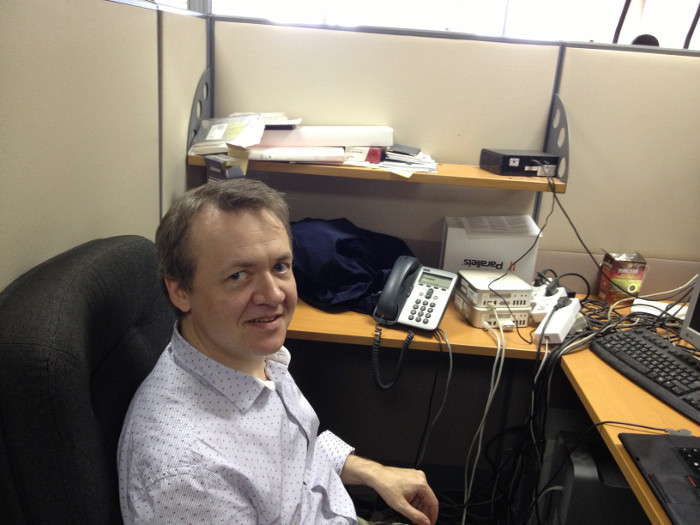 Q: Who are you and what you do?

Since mid-90s I was one of Linux maintainers. Back then all the communication was done via conferences and Linux mailing lists. Pretty often I was aggressively arguing with someone there, don't remember for which reasons. Now it's fun to recall. Being a maintainer, I wasn't just making something on my own, but had to control others. Kicking out those who were making rubbish (from my point of view), and supporting those who were making something non-rubbish. All these conflicts, they were exhausting me. Since some moment I started noticing I am becoming "bronzed" [Alexey is referring to superiority complex -- Kir]. You said or did some crap, and then learn that this is becoming the right way now, since ANK said so.

I started to doubt, maybe I am just using my authority to maintain status quo. Every single morning started with a fight with myself, then with the world. In 2003 I got fed by it, so I went away from public, and later switched to a different field of knowledge. At that time I started my first project in Parallels. The task was to implement live migration of containers, and it was very complicated.

Now in Parallels we work on Parallels Cloud Storage project, developing cluster file systems for storing virtual machine images. The technology itself is a few years old already, we did a release recently, and are now working on improving it.

My workplace is a bunch of computers. But I only work on a notebook, currently it's Lenovo T530. Other computers here are used for various purposes. This display, standing here, I never use it, nor this keyboard. Well, only if something breaks. Here we have different computers, including a Power Mac, an Intel and an AMD. I was using those in different years for different experiments. Once I needed to create a cluster of 3 machines right here at my workplace. One machine here is really old, and its sole purpose is to manage a power switch, so I can reboot all the others when working remotely from home. Here I have two Mac Minis and a Power Mac. They are always on, but I use them rarely, only when I need to see something in Parallels Desktop.

Q: What software do you use?

I don't use anything except for Google Chrome. Well, an editor and a compiler, if they qualify for software. I also store some personal data and notes in Evernote.

I only use a text console. For everything. In fact, on a newer notebooks, when the screen is getting better, the console mode is working worse and worse. So I am working in a graphical environment now, running a few full-screen terminals on top of it. It looks like a good old Unix console. So this is how I live, read email, work.

I do have a GMail account, I use it to read email from my phone. Sometimes it is needed. Or, when I see someone sent me a PDF, I have nothing else to do than to forward this email to where I can open that PDF. Same for PPT. But this is purely theoretical, in practice I never work with PPT.

I use Linux. Currently it is Fedora 13 -- not a newest one, to say at least. I am always using a version that was a base for a corresponding RHEL release. Every few years a new Red Hat [Enterprise Linux] is released, so I install a new system. When I do not change anything for a few years. Say, 5 years. I can't think of any new feature of an OS that would force me to update. I am just using the system as an editor, same as I have used it 20 years ago.

I have a phone, Motorola RAZR Maxx, running Android. I don't like iOS. You can't change anything in there. Not that I like customizations, I like a possibility to customize. I got a Motorola because I hate Samsung. This hatred is absolutely irrational. I had no happiness with any Samsung product, they either did't work for me or they break. I need a phone to make calls and check emails, that is all I need. Everything else is disabled -- to save the battery.

I am also reading news over RSS every day, like a morning paper. Now Feedly, before it was Google Reader, until they closed it. I have a list of bloggers I read, I won't mention their names. I am also reading Russian and foreign media. Lenta.ru, for example. There's that nice english-language service, News 360. It fits for what I like and gives me the relevant news. I am not able to say if it works or not, but the fact is, what it shows to me is really interesting to me. It was showing a lot of sports news at first, but then they disappeared.

I don't use instant messengers like Skype or ICQ, it's just meaningless. If you need something, write an email. If you need it urgently, call. Email and phone covers everything.

Speaking of social networks, I do have a Facebook account with two friends -- my wife and my sister. I view this account only when they post a picture, I don't wander there for no reason.

Q: Is there a use for paper in your work?

It's a mess. I don't have a pen, so when I would need it I could not find it. If I am close to the notebook and I need to write something -- I write to a file. If I don't have a notebook around, I write to my phone. For these situations I recently started to use Google Keep, a service to store small notes. It is convenient so far. Otherwise I use Evernote. Well, I don't have a system for that. But I do have a database of everything on my notebook: perpetual emails, all the files and notes. All this stuff is indexed. Total size is about 10 gigabytes, since I don't have any graphics. Well, if we throw away all the junk from there, almost nothing will remain.

Q: Is there a dream configuration?

What I have here is more than enough for me. This last notebook is probably the best notebook I ever had.

I was getting used to it for a long time, swore a lot. I only use Thinkpads for a long time. They are similar from version to version, but each next one is getting bigger and heavier, physically. This is annoying. This model, they changed the keyboard. I had to get used to it, but now I realize this is the best keyboard I ever had. In general, I am pretty satisfied with ThinkPads. Well, if it would had a Retina screen and be just 1 kilogram less weight -- that would be ideal.
Collapse